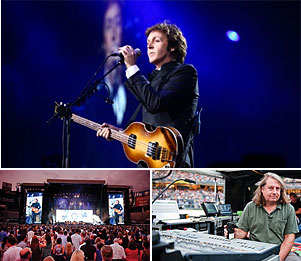 For the past 22 years, FOH engineer Paul “Pab” Boothroyd has had the best seat in the house for Sir Paul McCartney’s world tours. Recently he upgraded to VENUE Profile:

“I think I started out with a Midas XL3 and then to an XL4—a great analog console—and racks and racks of toys, and now I’m on an [Avid] Profile, which is a very powerful but small console …. [all the effects are] onboard, it’s what the desk can offer … Also traveling a lot with him, all I really need is the console … With Paul, there’s a lot at stake when you’re doing big shows all the time—40,000 to 50,000-plus people—you don’t want to just use something for the sake of using it and then it lets you down.”

With the Profile, Boothroyd is making extensive use of the onboard snapshots, especially with the 50-plus songs McCartney plays each day. “I have many songs on snapshots, which puts everything in order very quickly … With the different sounds and eras of his music, I’ve built in different tweaks that put the song immediately into the character of when it was recorded. So snapshots are really useful for those different EQs on vocals, reverbs, et cetera.”

Boothroyd is also recording about 70 inputs with Pro Tools|HD rig connected directly to the Profile. “We basically record everything he does. As soon as he steps on the stage, I hit Record and it doesn’t stop until he leaves.”

Call us to find out how you can upgrade your system with VENUE. If it sounds good for Sir Paul, it could be the solution for you too.