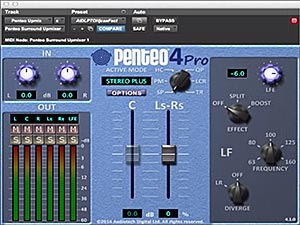 After comparing with other products, we can say that Penteo 4 Pro is hands-down the best sounding stereo-to-surround up-mixer in the market. Penteo’s unique algorithm generates a warm, more immersible sound with no unwanted sonic artifacts. Maybe the most amazing feature is that only Penteo can fold back 100% ITU back into stereo. Penteo is simply a must have for any surround workflow.

Mike Minkler, multiple Oscar-winning re- recording mixer at Todd-Soundelux in Hollywood: “I’ve used Penteo on almost every project for five years now, including films such as ‘Django Unchained,’ ‘The Twilight Saga: Breaking Dawn,’ and ‘Inglourious Basterds.’ The new plug-in really shines. With a flick of a switch I can take a two-channel mix and get a quality 5.1 mix, which is a huge asset when managing large projects, but even more so when working on smaller, independent films that just can’t afford more than a stereo source for me to work with.” To read an interview with Mike and how he is using Penteo 4 Pro, click here.

The new Penteo 4 Pro has new features, controls and native AAX64 support. To celebrate the AAX64 release, Penteo is running a limited-time promotion at 33% discount until April 16, 2014. Please contact us to order.