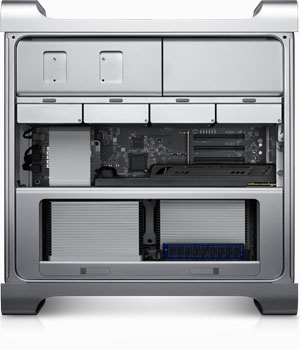 Apple finally announced the long rumored new Mac Pros which will be available in few weeks in 4, 6, 8 and 12-core versions. Base configuration is still a single chip Quad-Core, speed bumped to 2.8GHz and the new 6-core Xeon “Westmere” is also available as a singe chip configuration at up to 3.33GHz, peaking at 3.6GHz in Turbo Boost mode.

The Mac Pro now comes with the ATI Radeon HD 5770 graphics processor with 1GB of GDDR5 SDRAM and the even faster ATI Radeon HD 5870 with 1GB of memory is also an option. Both display cards support three displays out of the box with 2 Mini DisplayPorts and 1 dual-link DVI. Maximum internal storage is now 8TB with 4 x 2TB drives and SSD is now also an option for the ultimate speed an reliability.