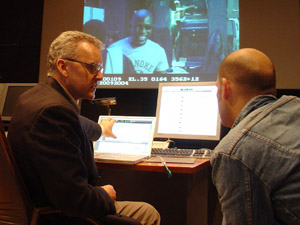 John McKay visited recently several SEC post clients in Zürich. During his stay John showed his Virtual Katy workflow solution which enabes totally new possibilities to audio post. As the sound post crew doesn’t have to wait for the final version of the picture, they can start with the creative work much earlier in the project timeline and do time- and nerve consuming resynchronisation automatically in few minutes instead of hours or days.

The massive production went through 50 plus version changes before completion. Scrambling to keep up with the rapidly changing picture edit became the main focus for the LOTR sound team. Creative sound track production became secondary to keeping the movie in sync. To overcome these challenges, McKay designed sound automation tools and workflows that automate the time consuming updates and resync sessions.

Virtual Katy finds and compares the differences between two or more versions of a picture edit, then non-destructively re-compiles a Pro Tools session to reflect the changes. Recompiling a session with Virtual Katy takes a fraction of the time it would take to process the changes manually.

By removing this postproduction bottleneck, sound designers and editors can regain creative time from the purely mechanical process of re-syncing – even in the most deadline driven environments. Considering the Lord of the Rings films were some of the most demanding sound post production projects ever, Virtual Katy has passed the real life test with flying colors.