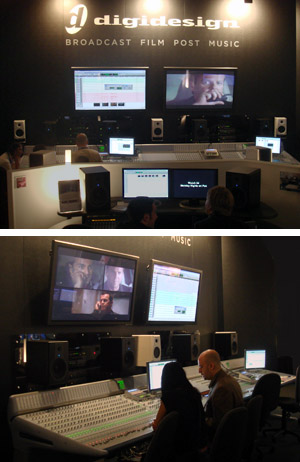 Digidesign showed a two-seat ICON D-Control system at IBC Amsterdam last weekend. Typical to large film mixing facilities, the system includes two HD|6 systems for mixing and a third HD|3 for dubbing and video playback. Colin Broad 9pin synchronizers provide sync and communication between the core systems, making it behave as one big mixing console. Almost 20 such consoles are already in use in Hollywood and first ones in Europe are on their way.

As even a large D-Control system costs just a fraction of a comparable large format console and offers in many ways better performance due to tight integration of the mixing console and DAW, it has become a huge hit in post production facilities around the world. Including Switzeland – we will be installing two new 32-fader systems next week.

The new D-Control and D-Command bundles created also lots of interest as they make an ICON system financially possible for even smaller editing, recording and mixing suites. Also interesting for many attendees was the complete Avid-Digidesign workflow which was demonstrated in detail with various workstations on Digidesign stand.

Feel free to contact us to find out how an ICON system can make your work easier and faster. You might be surprised how affordable the new bundles have made the step into the next level of productivity.