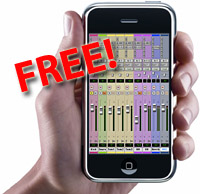 Digidesign today announced a free mini-Pro Tools for iPhone and iPod Touch. With no external hardware required, you can edit and mix up to 16 audio and MIDI tracks. A bit like Mbox 2 Mini but without the laptop. iProTools will take advantage of the iPhone’s revolutionary user interface and will add new features which support the iPhone’s accelerometer. Shaking the device will for example undo an edit and swiping the screen will move between edit, mix and plug-in windows.

“After testing the iPod SDK, we found out that the hardware power of iPhone/iPod Touch is more than enough to run the Pro Tools core engine with limited track count. The free iProTools will bring the power of Pro Tools to even more people who want to create where ever, when ever” says Digidesign senior platform manager April Fohlsom. iProTools will be available summer 2008.