United Music Foundation in Geneva has a mission to preserve and remaster historical recordings. From Sarah Vaughan to Jimi Hendrix, UMF preserves our musical heritage in a specialized studio run by David Hadzis.

Restoring ancient tapes and discs is physically challenging due to the fragile state of the material. We gathered some knowledge into the area while helping Queen few years ago when they were restoring original Freddie Mercury multitrack masters to Pro Tools. For example tapes are baked in an oven to extract moisture from the polyurethane-containing binding material that glues the iron oxide to the plastic tape. Without baking, the iron oxide containing the magnetic recording falls out and sticks to the playback head, destroying the recording. You need a true expert like David in order to avoid damaging the tapes with wrong treatment like too hot oven.

The second phase of challenges starts after the material has been digitized. Old recordings can have very strange frequency and phase issues due to tape generations, tape head adjustments, etc. so a 100% truthful monitoring is absolutely critical. Not only frequency response or room modes must be perfect but all phase problems must be eliminated to be able to analyze and correct the content of the historical recordings. This is where Trinnov comes into picture.

In David’s own words: “A friend who works in a Paris studio told me about the Trinnov ST-2.  And since I was seeing my studio’s acoustician, we decided to test it together.  We took a sound field sample with the special 3D microphone and started going…  I couldn’t believe my ears!  And my acoustician put a smile on his face. He had seen plenty of so-called “studio acoustics correction systems” but nothing like this.”

During that period, I was working on a boxed set of historical Swiss recordings by jazz legend Sidney Bechet called “Sidney Bechet in Switzerland” (4 CDs + an art book of 216 pages), which I was producing for the United Music Foundation, a non-profit based in Geneva for the preservation and enhancement of the recorded musical heritage.  I was doing heavy restoration, particularly on damaged audio tapes from the 50s, as well as a pass of manual declicking on a hour-long concert and interviews initially recorded on 78rpm acetate discs…

Then came the time for mastering and finalizing the project.  And the Trinnov ST-2 was not only there, but I knew that the studio’s sound was now reliable. Actually, I didn’t even have to think about it.  All I had to do was to switch it on and off.

A few months later, to my surprise, the Sidney Bechet project first received the Memoriav – Swiss Commission for Unesco Award in Bern, and then the Best Reissue Award by the Académie du Jazz in Paris.  The sound quality was praised by journalists, and I know I could not have achieved it without the Trinnov ST-2.”

We at SEC have made similar journey to David and his acoustician, searching for years for a usable room correction solution. After testing practically everything on the market, we realized that Trinnov is simply the only system which is physically capable to solve the room correction dilemma so decided to take Trinnov distribution for Switzerland. With the 3D microphone and immense DSP power, Trinnov can solve issues that other systems can’t even “see”. Due to our heavy Pro Tools and ICON background, we also helped Trinnov with their next generation of hardware, the Trinnov D-Mon series which combine room correction with an intuitive and flexible monitoring solution in one cost-effective box.

At first we expected Trinnov systems to be used mostly in challenging acoustic environments like bedroom studios or OB vans but to our surprise, most of the units are actually installed in already good, acoustically treated rooms to get the monitoring up to perfection. From broadcast to leading mastering studios, Trinnov has become a must-have system for clients striving for the ultimate monitoring quality. Swiss clients include TPC, SRF, RTS, RSI, Hardstudios, Jungle Jungle, Caduceus Mastering and the list is growing practically every week.

But don’t trust our or even David’s word, listen for yourself the world of difference Trinnov makes in our showroom. We’re also happy to come to your studio for a demo to show how you can make your room sound massively better and more reliable for a price of nearfield monitors. 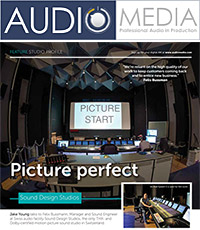 We installed recently a nice Hollywood-style Avid System 5 console to Sound Design Studios in Bern. With 64 faders and two producer’s desks, it’s one of the largest installations in the continent, offering perfect mixture of Pro Tools HDX and DSP-based mixing. The System 5 brought SDS to the highest level in film mixing, competing directly with the best facilities in the world.

Read Audio Media magazine’s article for more about the only THX- and Dolby-certified motion picture studio in Switzerland.