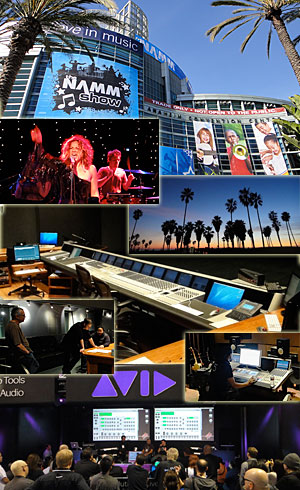 NAMM 2011 motto was – what else – “take it to eleven”. And they sure did, especially in the guitar and drum halls. At the recording end of the show it was all about Pro Tools 9. Even the fiercest competitors were advertising their gear as Pro Tools 9 compatible. The message was clear: The DAW wars are over, it’s all Pro Tools now, not only in the high end where Pro Tools HD has been the standard for a decade already.

Besides NAMM, we also visited couple of interesting post facilities like Todd-AO, Sony Pictures and John Ross’ 424 inc. Obviously all facilities were running on Pro Tools HD, usually 5 HD systems tied together to Euphonix system 5 with input counts around 600 channels. We had great time in the machine rooms exchanging war stories with the techies and had a glimpse of couple of next summer’s blockbusters in the big mixing rooms. But we can’t really talk about that or they’d have to kill us.

On the music side, we did Euphonix training in Will Smith’s Boom Boom Room, a super cosy but very high tech studio in the Valley. Great crew, great gear and chilled athmosphere made it a nice experience to get into the Euphonix 5 MC which will arrive in our showroom soon. We also had nice dinners with couple of multi-million selling producers, engineers and songwriters which is always a great opportunity to learn more.

Want to hear more about how the top guys in the world work? And what happened in Vegas? Just visit us in the showroom for a cup of Lavazza. And go eleven with the spankin’ Les Paul, SG, Tele and StingRay5 that we added to the showroom collection…