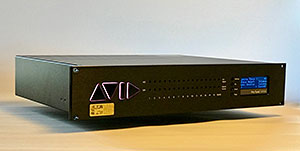 The modular design of MTRX lets you roll your own dream machine and upgrade its capabilities in the future. Additionally to the 16ch AES/EBU and 64ch BNC coax MADI on board, you can add up to eight of the following cards. Up to six of them can be analog converters for max. 48ch analog in or out.

If there ever was a Swiss army knife for highest end professional audio, MTRX is it. Contact us for a demo, this is the future of audio interfaces.